Are the children being trafficked for inhumane and illicit purposes? Why are the millions of children who we see on streets, labouring in restaurants, carrying out chores in unorganised sector not on the rolls of child care institutions or adoption agencies? Why are children languishing in shelters that are not even registered or not linked to adoption agencies?

Depending on who you ask, people will give you complex answers. But here is the thing – there are clear, concrete, fixable issues that can be addressed and have been brought to light several times by the media, courts, and even the government authorities. Permanent solutions are possible with political will and participation of the civil society.

We, at WAIC, are working to ensure that abandoned and orphaned children are accounted for and reach a positive outcome in the best interest of the child (including a functional path for the children to reach the legal adoption pool). 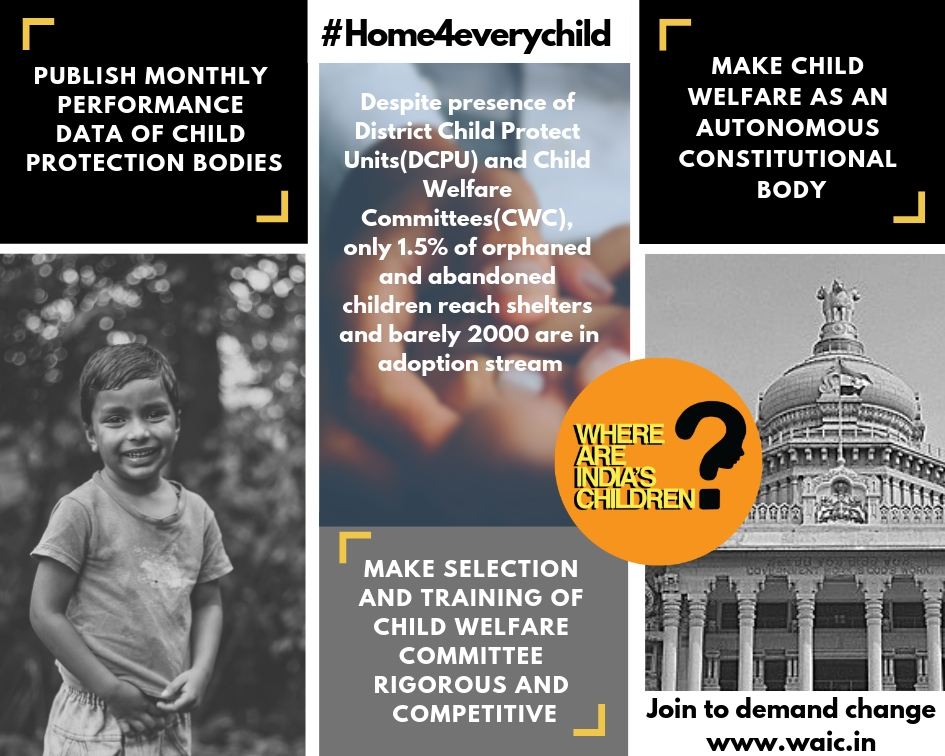 Now, you can further deep dive into the explanation of Issues and Proposed Solutions below:

Children continue to be abandoned in our country. No reliable mechanism exists for accounting them. Only about 1.5%  out of the estimated 30 million abandoned children even make it to child care institutions (CCIs), aka shelters.

Unregistered CCIs continue to exist without being forced to register under the Juvenile Justice Act 2015 (JJ Act) or being shut down, despite the Supreme Court directive. Which means shelters are illegally keeping children without any monitoring.

Though efforts are being taken to link Registered CCIs to specialised adoption agencies (SAAs), utilisation of this linkage is currently ineffective, thus destroying chances of majority of abandoned and orphaned children to get adopted into a family.

2.5 to 5 lac children who live in CCIs year after year are not periodically reviewed for adoption eligibility. Meaning that if a child was not legally available for adoption in the beginning, no-one will ever check again whether the situation changed and the child became adoptable over time.

Despite the existence of several district and state level government bodies for child welfare, CCIs are not thoroughly monitored as per the law and many CCIs continue to ignore the possibility of adoption. Because who is going to complain when the job is not done? The children?

Talking about government bodies that deal with children, there is a hugely important one called Child Welfare Committees (CWCs) that are supposed to exist in every single district of India. CWCs are autonomous bodies with the final authority and responsibility towards all children who need care and protection, and among many other things, are supposed to monitor CCIs and move children into the adoption pool.

For India’s vulnerable children to even have a slightest chance, CWCs need to be the extremely high-functioning competent bodies. However in many districts, CWCs have been called out for being untrained, understaffed, unaccountable, and unmonitored. There is no escalation or complain mechanism if CWCs in any districts are not properly constituted, do not function as prescribed, and do not function on a full-time basis, further risking the welfare of vulnerable children.

So what can be done about it? Here are the much-needed solutions:

Deploy the best long-term technology solutions to make every child ‘visible’ in every CCI across India. Use technology for shelter home management and government processes to ensure good data-based decisions about the child’s welfare, such as moving eligible children to the legal adoption pool.

Amend the JJ Act to add mandatory periodic reviews for every child in CCIs to check for adoption eligibility.

Publicly post the monthly performance data of the district level child protection bodies: Child Welfare Committees (CWCs) and District Child Protection Units (DCPUs). Aggregated data of proactive CCI visits, cases handled, and decisions made should be publicly reported.
Hold a rigorous selection process for CWC positions, and make training a prerequisite for the job, rather than a post-requisite.

CWCs are part-time honorarium positions, with no clear checks and accountability. Child welfare should be built out as a separate constitutional structure, such as the Election Commission of India, where central, state, and district child protection bodies are monitored and accountable, with a quick response complaint channel against these bodies. Build out legal consequences for child protection bodies failing to complete their responsibilities.

Thanks for going through the issues and asks! For further reading, you can check out all the related References.